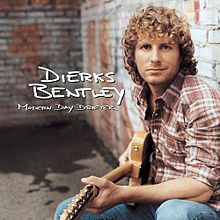 Modern Day Drifter is the second album of country music singer Dierks Bentley. It was released May 10, 2005. His second album for Capitol Records Nashville, it produced three singles on the Billboard Hot Country Songs charts: the #3 “Lot of Leavin’ Left to Do”, and the Number One hits “Come a Little Closer” and “Settle for a Slowdown”. The album sold 1.5 million copies in the US.