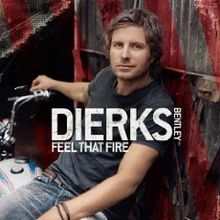 Feel That Fire is the fourth studio album by American country music singer Dierks Bentley. It was released on February 3, 2009 on Capitol Records Nashville. The album’s first two singles were the title track and “Sideways”, both of which reached Number One on the Billboard Hot Country Songs chart. A third single, “I Wanna Make You Close Your Eyes”, was released in July 2009. The album has sold 327,000 copies as of 2010.