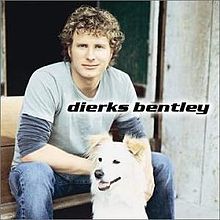 Dierks Bentley is the first major-label album of country music singer Dierks Bentley. It was released August 19, 2003 (see 2003 in country music). Released on Capitol Records Nashville, the album produced the singles “My Last Name”, “How Am I Doin'”, and “What Was I Thinkin'”, which served as Bentley’s lead-off single, also became his first Number One hit on the Billboard Hot Country Singles & Tracks (now Hot Country Songs) charts. The album sold 1.1 million copies in the US.

The track “My Love Will Follow You” was originally recorded by Buddy Miller on his 1995 album Your Love and Other Lies. “Bartenders, Etc.” and “Whiskey Tears” were originally featured on Bentley’s independently released 2001 album Don’t Leave Me in Love, and were re-recorded for this album.